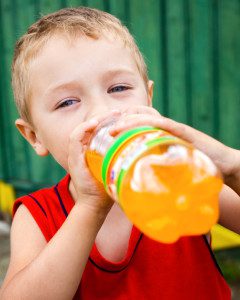 In a very timely study released in the Journal of Pediatrics this month, researchers from Columbia University, the University of Vermont and Harvard studied behavior in approximately 3,000 young children and found that problematic behavior was linked to soda consumption.  They used a very well accepted child behavior rating scale, one that I have personally used in my practice for over ten years, to obtain parents perspectives on their children’s behavior over the past two months. They found that 40% of kids had at least one soda per day and 4% drank as many as four or more. They found that aggression, withdrawn behavior and attention problems were highly associated with soda drinking and the behaviors were incrementally worse for those children who consumed multiple sodas per day.  It is very difficult for a study to declare that one thing causes another, but the way studies are designed, they can say with certainty that a relationship or association exists.

As we learn more and more about nutrition and the dangers of processed foods, excessive caffeine, sugar and preservatives it comes as little surprise that drinking soda can be problematic for young kids. Their brains are so very sensitive and reactive. For years people believed that sugar caused ADHD. We now know that while sugar can exacerbate aggression and attention problems, we do not believe that it causes this particular disorder.  The study specifically showed that kids who drank a lot of soda were more likely to destroy others possessions, get into fights and even physically fight with others.

So what to do with your young child who loves, begs and even craves that soft drink? I always say that kids watch our every move and we have much more leverage with our kids if we walk the walk – not just talk the talk.  As such, the first step is probably for adults to completely cut soda out of their diet, or perhaps save it for an extremely special treat to be enjoyed very infrequently.  Keep sodas out of your house and get in the habit of ordering water in restaurants.  If your kids just love the bubbles, try seltzer or mineral water with a splash of cranberry or even orange juice.  Explain to young kids that in the same way that we eat healthy foods such as fruits and vegetables to grow big and strong, eating and drinking things that are unhealthy can affect us in negative ways and may even make us feel grumpy or angry, or act in “not nice” ways.

If you would like more information, please contact Dr. Wendy Rice at (813) 766-7021 or find me online at www.RicePsychology.com