Prom Woes: Fun Times for Some, Sad Times for Others | Rice Psychology

Prom season is a very high anxiety time for many teens. In Florida, proms are already in full swing. In New York, where I grew up, they were in June, right at the end of the school year. Prom season for me was mixed. When I was in 10th grade, a senior from the “other” high school in my town asked me to prom. I thought he was the greatest and was thrilled to be his date. However, when he saw my dress, he clearly indicated that it was not what he had in mind – and the evening followed suit! Needless to say, it was not the best night of my life. 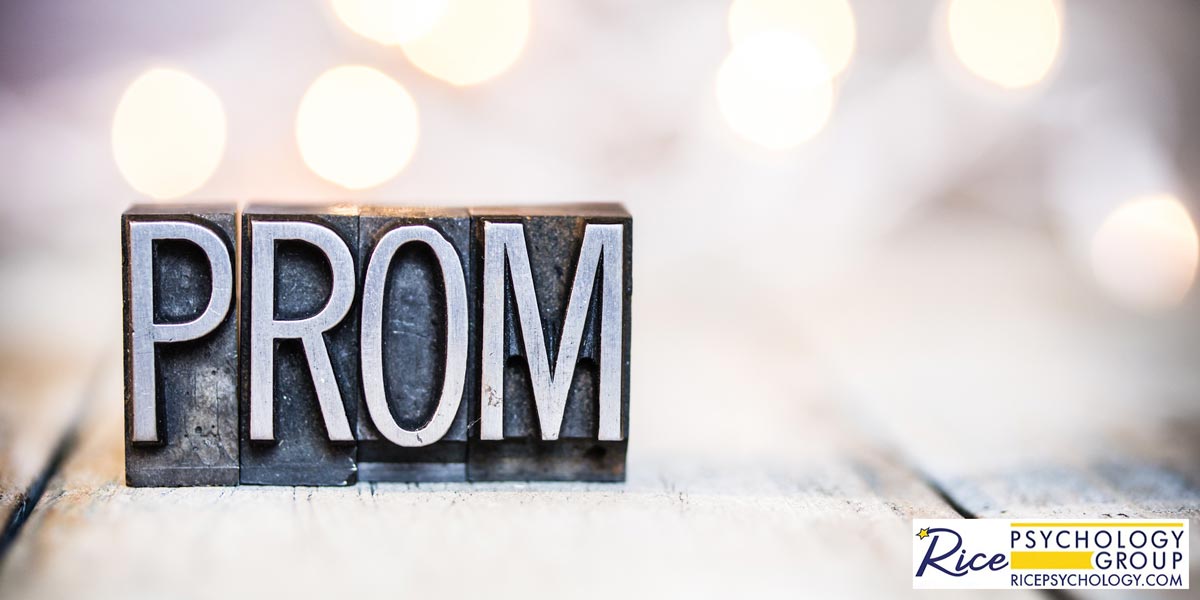 Fast forward to 11th grade when I was invited to the prom by a good friend and we spent the evening together with a group. That was fun! By 12th grade, I was kind of over the prom thing but decided at the last minute to go with someone I didn’t know very well. I had been having a very rough time that year and wasn’t in the best frame of mind. I made it to about 10 PM before I called my brother from the lobby of the Waldorf Astoria in Manhattan to pick me up.

I’m guessing each of you reading this has your own prom tale, whether you went and loved it, went and hated it, went and wish you hadn’t or didn’t go and are glad you didn’t – I could go on!

Helping Your Kids Weigh Their Options

As a loving parent, how would you help your child in a precarious prom situation? There are so many ways to think about this one, but it’s important to remember that your kids are much more likely to act on an idea if they come up with it on their own. For example, they can go with a close friend of the same gender or a group of friends. Like me, they could go with someone they don’t know very well, even if they must do the asking and hope for the best. Some other prom options can include:

If there is no option for them to attend, it’s possible that they won’t actually be missing much anyway, and it could be that the hype is greater than the real thing.

Asking Someone Out/Being Asked Out

Asking someone out, whether to prom, a cup of coffee, etc., can be one of the biggest anxiety-inducing situations imaginable. If your child reveals that he/she is feeling nervous, anxious or scared about asking someone out to prom, your job is to be reassuring. Let them know that even though rejection can sting for a bit, it’s an important part of growing up and can help them get beyond the fear of asking someone out. They can face this fear head-on, deal with the aftermath and learn from it.

As a loving parent, how would you help your child in a precarious prom situation? Click To Tweet

It’s also important for your child to be honest with themselves when they’re the ones being asked out. If they outright don’t want to attend prom with the person who asks them, encourage them to trust their feelings and the decision they will eventually make. Whatever they decide, reassure them you’ll be there to support them.

Here When You Need Us Most

Anxiety has a way of putting a damper on life, which is why it’s so important for you to deal with it in the best possible manner. Don’t know where to start? Rice Psychology Group can help! Our team of licensed psychologists in Tampa is always ready to talk with you, listen to your issues and help you find the best ways to feel better. Contact us today for more information about our services.