Feeling Angry: Dealing with Your Feelings and Moving On | Rice Psychology

I consider myself to be a pretty calm and relaxed individual, but throughout my life, I’ve always had difficulty dealing with anger. It’s not so much that I always lash out when I’m angry (I rarely do this), it’s more that I have trouble getting over things that anger me. For example, last month, my sister made a passing comment during a family get-together where she poked fun of my blouse. It seemed like harmless fun but it was said in front of many people who laughed. At first, I was embarrassed but then I became angry. Rather than talk to her about it, I kept it bottled in and it grew to the point where I thought about it for days on end. Is there any way for me to get over things that anger me without stewing about them for days? 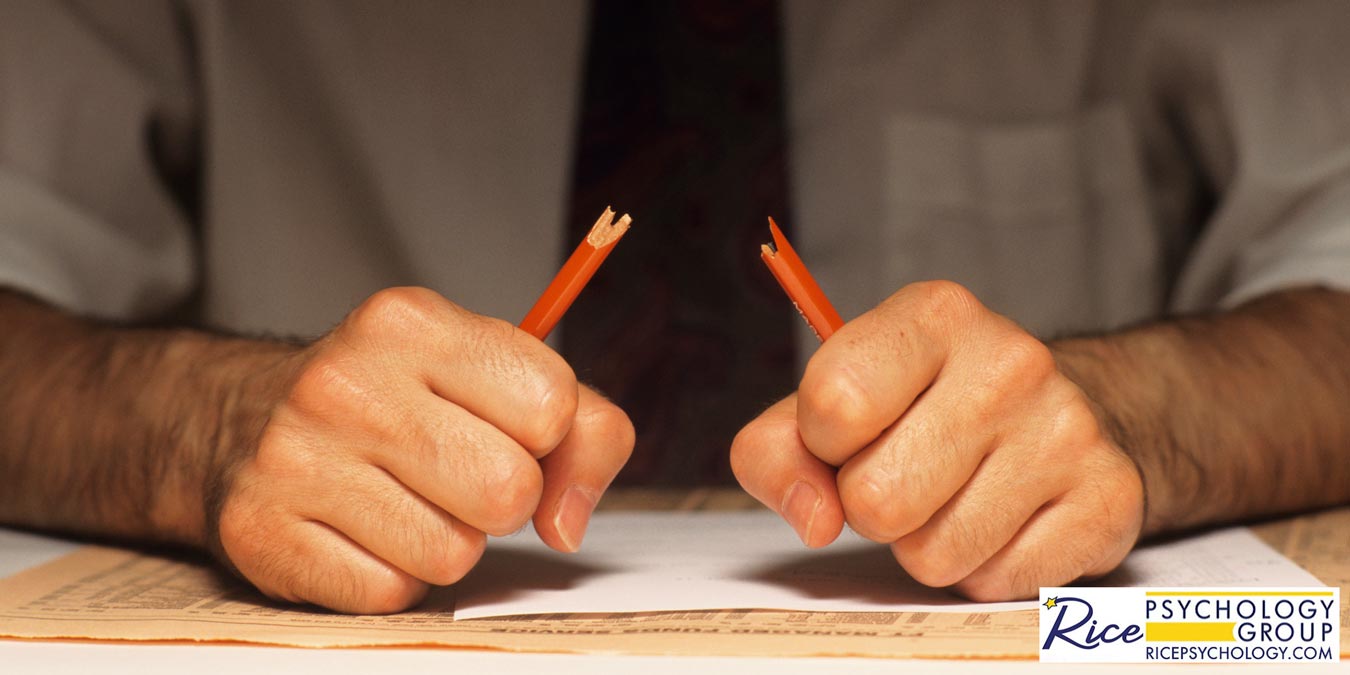 Dealing with situations that angered you in the past and keeping those emotions bottled up over time can be a great burden to deal with. It may even become such a problem that constantly reminding yourself of what it was that angered you results in you acting out against friends and family. It can get so bad that you might even do or say things you don’t really mean. This is what pent up anger can do. If a situation like a grudge or resentment isn’t handled properly, it can even jeopardize your relationship with those you care for.

If you’ve dealt with something similar to the vignette above, then you might be wondering what you can possibly do to better manage and process your anger in a responsible and even beneficial manner. The great news is that there are different methods you can take to do this.

Dealing with intense feelings, especially anger, can be tough, but our licensed psychologists in Tampa can help you understand your anger and deal with your feelings in productive, rather than destructive, ways.

Be Aware of Your Feelings

Anger puts you in a state of mind where you know something is wrong and needs to be addressed. Click To Tweet

Rather than replay the moment that angered you and imagining what you could’ve done to avoid feeling the way you do, acknowledge your emotions now. Anger puts you in a state of mind where you know something is wrong and needs to be addressed. When you’ve made the decision that this anger will not be beneficial, you can then make a conscious effort to take steps to understand what’s going on and begin to let go of what’s burdening you.

This may be the hardest part of dealing with your feelings, but in order to fully move on from being angry, you may need to make a strong effort to forgive the person who angered you or put you in the position that resulted in your feeling the way you do. Remember that we’re all human and imperfect. We do and say things that we oftentimes don’t mean or make off-the-cuff remarks that seem harmless now but may be hurtful later. Be generous in how you interpret other people’s behavior toward you and when deciding whether to cut them some slack or give them the benefit of the doubt. Don’t allow what another person did or said to have power over you.

Although being positive is easier said than done, reframing situations and interactions in a more positive light can work wonders. Bitterness can affect the way you think, behave and see other people. Learning how to forgive the person who triggered your angry feelings and entering a state of positivity is very possible, and can be an even easier road to travel with professional help.

One reason that resentment and anger lingers over people is because they keep it bottled in. Click To Tweet

One reason that resentment and anger lingers over people is because they keep it bottled in. Think of anger as a corrosive liquid in a bottle. Over time, the liquid will damage its container. Anger can do the same to a person who doesn’t release it in a calm and responsible manner. Sitting down with someone, even the person who angered you, and explaining your feelings and how a certain situation hurt you can lift a heavy burden off of your shoulders. Doing this in a therapeutic setting with someone who’s very familiar with these behaviors is also a great option.

Remember that forgiving and moving on far outweighs being unforgiving and dwelling on the past. Click To Tweet

Going back to our previous point, focusing on now rather than the past can also help to alleviate your anger. Accepting that the past is the past and that you won’t be able to change the situation that angered you is an important step in leaving your anger behind. Focus on what you’re doing right now instead of the what-ifs. Remember that forgiving and moving on far outweighs being unforgiving and dwelling on the past.

Different emotions can have different effects on people, and learning how to move on or accept them can be great character-building qualities. Our psychologists in Tampa understand that feeling certain ways can affect how we live our lives. If you’re ready to move on from a situation that left you feeling angry, then contact us today to get started.

2 Responses to “Feeling Angry: Dealing with Your Feelings and Moving On”