Last week, I found out that my best friend is expecting a baby, so a bunch of us went out to celebrate during the weekend. While chatting, I was asked how I plan to raise my own baby daughter. I kind of brushed off the question at first, but truth be told, I hope I’m able to raise her the way I was raised. I mean, you rarely see kids outside playing anymore. They spend their days at school, doing homework and in front of a screen, and they rarely have time to use their imagination. I still remember spending hours outside with my friends, having fun and taking the world by storm. I don’t know if that had an effect on my later life, but the fun I created alone and with my friends and neighbors makes me hope that my daughter gets to enjoy at least some of the same. 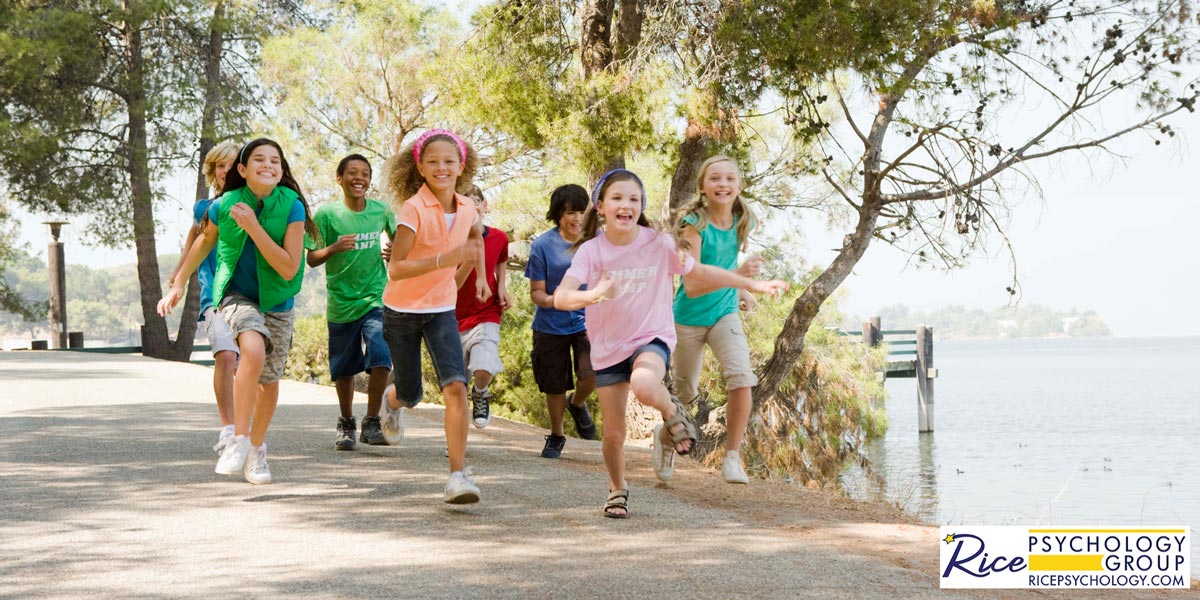 Do you remember playtime when you were a kid? Perhaps you spent your afternoons with dolls, climbing trees, riding bicycles and everything else in between. I made mudpies in the bushes behind my house, built roads and cities with my hand-me-down matchbox cars and wooden blocks, and drew enough rainbows to fill a unicorn’s dream!

“Free play” is critical in the development of physical, manual, intellectual and social skills. Click To Tweet

There’s no doubt that you had loads of fun, but something you might not know is that playtime provided you with the opportunity to practice important skills that were crucial to your growth. “Free play” is critical in the development of physical, manual, intellectual and social skills. Unfortunately, free play is increasingly scarce these days, but at Rice Psychology Group, we know it’s time to bring it back.

The Effects of “No Play”

The fact that lively afternoons playing tag, cool evenings on bikes and warm summers in trees are distant memories for most of us should have been a bright red flag; especially when you consider the disadvantages of not having play time.

According to researchers who experimented on play deprivation with laboratory-raised animals, a lack of playtime has significant emotional drawbacks. When monkeys are raised with only adults from their species, they grow up not playing. In adulthood, when these play-deprived monkeys are tested in varying scenarios, they are incapacitated by fear, cower excessively or lash out.

However, monkeys that grow up with regular playtime with other young monkeys highly contrast their counterparts. They react appropriately when faced with threatening or uncomfortable scenarios and are able to regulate their emotions.

According to Dr. Stuart Brown, founder of the National Institute for Play, humans are, by nature, inherently designed to enjoy and participate in play. Not doing so can mean less-than-good news. In fact, when he interviewed 26 convicted murderers in Texas, Dr. Brown came to a sudden realization: the killers came from abusive homes and did not get to play much as kids.

Get to Know the Benefits

Children love the thrill of being out and about with friends. Free play offers children moments of frustration and conflict that must be dealt with before playing resumes. Needless to say, the benefits don’t stop there. Free play additionally allows children:

When I was a preteen, my brothers had already left home, so I was essentially an only child. This could have been a lonely time for me, however, I was always looking for things to do. For example, I taught myself how to juggle by sitting in my driveway one weekend. I started first by throwing one ball up from one hand and back with the other.

Eventually I was good enough to throw one ball up and then the next, instead of passing it from one hand to the other. And finally, one Saturday, I was actually able to juggle three balls. Well, you might think, “Whatever, so what if you can juggle?”, but just think about the lifelong lessons I took away from that experience.

I learned how to break a complex task into their parts, practice until I had mastered each step, demonstrated major stick-to-itiveness, and more than three decades later, still believe that if I set my mind to something difficult, as difficult as learning to juggle, I can do it! Now, maybe that’s not the most creative example of play, but it’s what came to mind as I wrote this blog.

Childhood is a beautiful thing to experience, which is why your kids deserve to live theirs to its fullest. Click To Tweet

Childhood is a beautiful thing to experience, which is why your kids deserve to live theirs to its fullest. If you don’t know exactly how to get this started, or if your child is currently experiencing some troubles, know that our Tampa team of psychologists is always ready to provide assistance. We’ll help them identify the problem to ensure that they find the best path towards feeling better. Contact us for more information today.