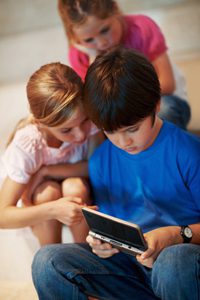 Jonathan can sit for hours playing video games.  He advances quickly through the levels and his agile fingers make his characters run and fight throughout his games.  Jonathan shows excellent concentration and coordination despite being diagnosed with ADHD and related Executive Functioning Impairment.  His ability to focus on his video games contrasts sharply with how “antsy” he is in his 6th grade class.  The contrast frustrates and confuses his family, and causes problems in school, social situations and at home.

Jonathan’s father isn’t fully convinced the diagnosis is correct — after all, he argues, Jonathan sits still for hours playing his videos, so maybe he’s just not trying hard enough.  Jonathan’s mother, however, understands that Jonathan has ADHD and Executive Functioning Impairment and therefore does not hold Jonathan accountable for his school work, chores or the way he bullies his younger sister.

What neither parent understands is that while ADHD and Executive Functioning Impairment manifest themselves in behavioral difficulties, the underlying problem is located in the front of the brain.  The prefrontal cortex, the area located just behind the forehead, is responsible for coordinating important functions such as planning, prioritizing, organizing, getting started and sticking with tasks.  ADHD and Executive Functioning Impairment results when that part of the brain is not working correctly and literally cannot do these things well and certainly cannot coordinate them effectively.

Effective executive functioning requires that numerous cognitive (thinking) skills work well on their own and together.  Below is a description of the six broad skill areas that have been identified. When individuals have ADHD and the related Executive Functioning Impairment, typically one or more of these areas is affected which can make every day demands incredibly challenging.

The six functions that effect cognitive functioning in ADHD and Executive Functioning Impairment individuals are:

Organizing, prioritizing and activating tasks.  Although some individuals with ADHD have very high energy levels, it can be extremely difficult for them to focus their energy to get started.  They also tend to have difficulty figuring out what to do first, the best order in which to proceed or estimate how long each step might take.  They tend to procrastinate until the deadline looms and then will only begin when they’re “threatened” with dire consequences.  Even simple, routine tasks such as homework or laundry are put off until they become emergencies.  The inability to effectively manage ones’ emotions and behaviors combines with memory challenges to further frustrate the person as well as those around him or her.

Focusing, shifting and sustaining attention to task.  Individuals have trouble focusing on immediate tasks at hand as well as ongoing tasks.  They’re easily distracted not only by activities surrounding them, but also by their own thoughts and actions.  When working on a task, such as reading, they understand the words however, due to the lack of concentration they are often unable to retain what they’ve just read.

Remaining alert, sustaining effort and controlling speed.  Many people with ADHD and Executive Functioning Impairment do well with short term tasks, but can’t get through long term projects.  They procrastinate and find it difficult to complete responsibilities on time.  Many have sleep issues, finding it difficult to get to sleep and to wake up in the morning.

Difficulty with accessing recall and working memory.  People with ADHD often have trouble with recalling information they’ve recently learned, however they can often easily remember events from long ago.  Memories of events that we have participated in get stored in a different part of the brain than memories for things that we have to remember to do in the future.  Keeping several things in mind at once while working on a specific activity poses major challenges for those with ADHD and Executive Functioning Impairment.

Problems with monitoring self-action. Impulsive and even reckless behavior, jumping to inaccurate conclusions and difficulty in pacing themselves are problems that individuals with ADHD and Executive Function Impairment encounter daily.

Although the problems tend to be chronic, people with ADHD and Executive Functioning problems respond well to various treatments and therapies.  If you or a loved one is exhibiting difficulties such as those described above, the psychologists at Rice Psychology Group have an almost endless supply of “Strategies for Success” to share with you.  We use strategies such as how to stop and think before acting, specific ways to recognize and manage emotions, and the “hows and whys” of planning, organizing and learning to manage time.  We even have a successful computer program to help build attention, memory, processing speed and executive functions!

If a family member is exhibiting symptoms such as those listed, or if they have already been diagnosed and you want more information about how Rice Psychology Group can help, contact us to schedule an appointment.