A Close Look Into High-Conflict Divorce, Psychological Warfare and PTSD in Children | Rice Psychology
All initial intake and therapy sessions are continuing to be provided virtually via our secure Zoom portal. Gifted evaluations are being offered both via telehealth and in-person. More extensive evaluations are primarily being performed online with select portions administered in person as deemed appropriate, necessary and safe. You can schedule a 10-minute consult with one of our licensed psychologists by contacting us here or using our contact form. 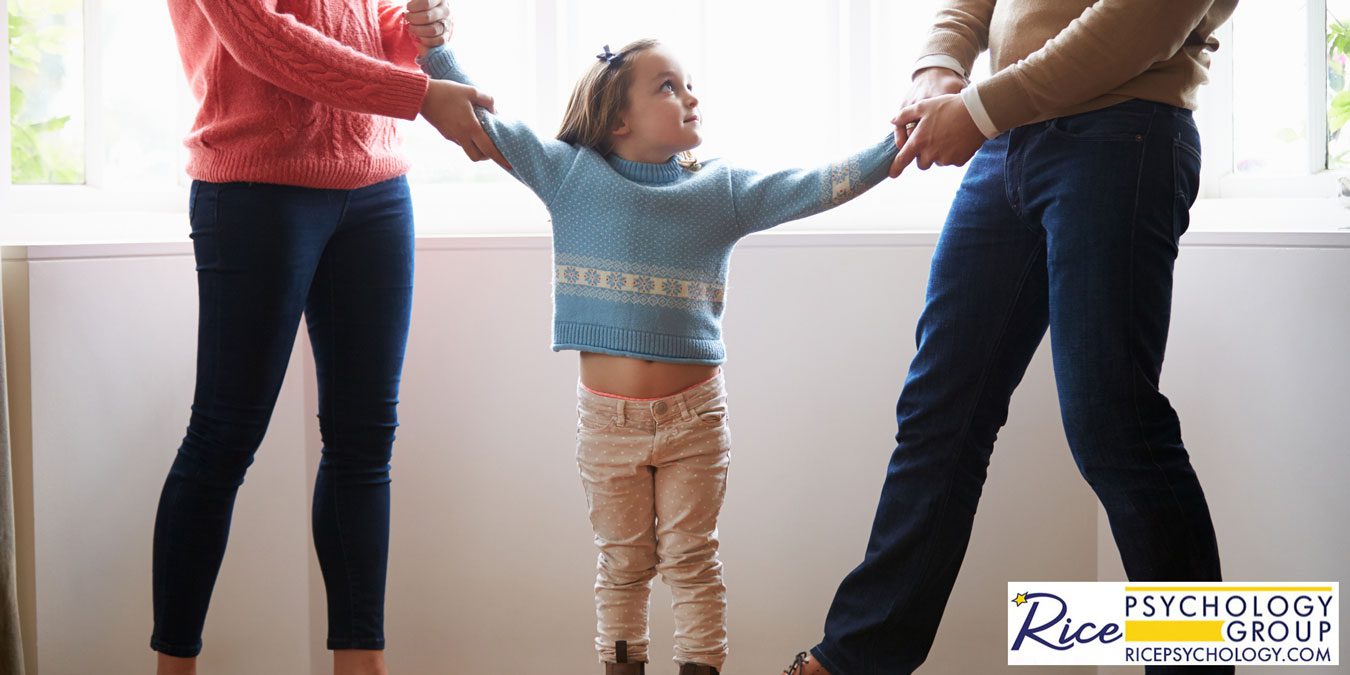 When a marriage ends, sometimes a high-conflict divorce begins. It’s a situation that we often see when a person and their spouse decide to divorce while wanting for it to be amicable and fairly simple. After all, many of these couples have depended on one another for many years, built a life together and have had children.

What many don’t realize, however, is that their spouse has been waiting patiently from a concealed position, strategically surveying the situation before taking action. At just the right moment, the spouse signals to their attorney who is armed with motions and ready to file. Before they know it, they’ve been served with divorce papers.

Dealing with a high-conflict divorce isn’t easy, especially when children are involved. In this piece, we’ll be looking at this topic along with “psychological warfare” and Post Traumatic Stress Disorder (PTSD) in children stemming from the situation.

We are knowledgeable about how overwhelming a divorce can be when tension on both sides is high. Get in touch with us today to help you and your children manage and even grow from this difficult situation.

If you’ve ever found yourself in a high-conflict divorce, then it’s easy to understand how sensitive and volatile the entire situation can be. It’s something many have experienced, but for those unfamiliar with it, it usually goes something like this.

Dazed from the initial attack, you’re unable to move. It’s as if you’re paralyzed but only have around a month to get yourself together and respond, otherwise, you risk losing everything. What about your children, the house, cars or even your beloved family pet? How about the photos, savings and investments?

After the initial wave of insecurities, helplessness and anxieties subside, you soon realize that it’s time to become proactive. You contact an attorney who explains your options. Mediation is mentioned and you immediately decide that this is the best chance of having an amicable and fair process of civilized negotiation. Your spouse agrees and your hope is restored, except, unbeknownst to you, it’s one of the rules of war in the process called divorce.

You and your attorney arrive at a mediator’s office. Mixed feelings of anxiety, longing for reconciliation, embarrassment, sadness, loss and anger surge through your body upon seeing your spouse with his/her attorney. They’re looking over your financial statements without you. In an instant, you’re reminded of the various times you both did this together: the time when you purchased a home, first set up college funds for your children and began investing to subsidize your retirement together.

The tears starting to well up in your eyes instantly dry as the mediator explains the mediation and divorce process, marital laws, timesharing options and equitable distribution. Timesharing? You think to yourself as a novice to divorce, “We don’t own a vacation home.”

You try your best to answer the mediator’s questions and it isn’t long before your attorney objects to several of them. Communication begins to break down and hurtful statements and accusations are flung across the table. Accusations of being a lousy provider, father and husband are retaliated against with accusations of being an unfit mother and a cold, inattentive wife. Soon you both accuse each other of being selfish, ignorant and crazy. At every crucial juncture where a settlement seems close, another shot is fired, another dagger is plunged. “Everything is off the table. I want a judge to decide!” An impasse has been reached.

Months, maybe even a year or more has passed and a judge still hasn’t heard your case. With finances decreasing rapidly, assets being liquidated and opportunities and resources becoming increasingly negligible, recruiting your children in supporting roles as spies, messengers and lookouts becomes a rational choice. You convince yourself that your spouse never spent any quality time with them anyway. “Maybe it will help them to get a little revenge. It certainly can’t hurt them anymore than they already are,” you think to yourself. It isn’t long before recruitment methods are employed by both you and your spouse onto your children like coercion, financial assistance and offering protected status. This is perhaps the most destructive moment of the divorce war.

When Children Are Involved

In her 1992 book Trauma and Recovery: The Aftermath of Violence – from Domestic Abuse to Political Terror, Judith Herman M.D. wrote, “But the final step in the psychological control of the victim is not completed until (he) she has been forced to violate (his) her own moral principles and to betray (his) her basic human attachments. Psychologically, this is the most destructive of all coercive techniques, for the victim who has succumbed loathes (himself) herself. It is at this point, when the victim under duress participates in the sacrifice of others, that (he) she is truly “broken.”“

As your children are transported back and forth between homes every week, their wounds in this high-stakes battlefield are unavoidable. They are emotionally bleeding week after week and nobody calls for a ceasefire to tend to their injuries. Instead, they are told, often indirectly, that one parent is trying to protect them while the other is to blame. This dynamic inevitably leads to all-or-none thinking. Unarmed and ill-equipped to deal with the emotional landmines placed around both homes by parents who despise one another, children are forced to accommodate their parents.

They tell each parent what they think he or she wants to hear in order to avoid prolonged conflict. From this, your children learn how to avoid all conflict, how to lie to avoid problems and how to manipulate to get what they need. They learn that relationships are only good if they are conflict-free or if they can just endure the intense verbal attacks.

Their trust is shattered by parents whose disdain for one another constantly interferes with decision-making on their behalf. From this, your children learn to rely on no one and how to make decisions and plans for themselves prematurely.

Although they very much want and need a sense of safety and love in a close relationship, they don’t really believe that they are deserving of love and have no reference for how to develop and maintain a healthy, secure relationship. From this, your children learn to protectively withdraw and isolate themselves from others or attach too intensely and become overly possessive and clingy with others.

They may also become emotionally or physically upset by reminders of the divorce and experience intrusive thoughts or related nightmares. They may intentionally go out of their way to avoid places or people that remind them of the divorce and can also appear indifferent or numb, and some older children may turn to drugs or alcohol to numb themselves. Anxiety, feeling on guard, being unable to relax, being constantly irritable or startling easily are also common.

While PTSD is not typically associated with divorce, children involved in high-conflict divorces often feel like they’re living in a warzone, as if there’s a constant threat of danger and may experience firsthand repeated or extreme exposure to aversive details without having enough time to heal from one attack before they’re exposed to the next. Essentially, these children are held in domestic captivity, even after such divorces are finalized.

What Parents Can Do

Children in a hostile divorce model have symptoms similar to those being abused and neglected. Click To Tweet

If you’re currently going through a high-conflict divorce, then there are a few things to seriously consider to help lessen the impact of the situation on your kids:

Do it for Your Children

Children in a hostile divorce model have symptoms similar to those being abused and neglected. Some professionals may even say that kids within the hostile divorce model are being abused and neglected. It’s my feeling that this phenomenon is not getting the attention it deserves. If you and your children are in the middle of a high-conflict divorce or are still dealing with the aftermath of one, then know that there is help available. Contact Rice Psychology Group in Tampa today to work together for change and for the benefit of your children.

2 Responses to “A Close Look Into High-Conflict Divorce, Psychological Warfare and PTSD in Children”